In a hidden Markov model (HMM), the sequence of \(T\) output variables \({y_t}\) is generated by a parallel sequence of latent categorical state variables \(z_t \in \left\{ 1,\cdots , K\right\}\). These hidden states are a Markov chain, so that \(z_t\) is conditionally independent of other variables given \(z_{t-1}\).

The primary use of HMMs in building energy simulation is for identifying and modelling occupancy (Candanedo, Feldheim, and Deramaix (2017)). The hidden variable \(z_t\) may denote a binary state of occupancy or a finite number of occupants; the observed output \(y_t\) may denote any measurement impacted by occupancy: environmental sensors, smart meters, cameras, infrared sensors… There is a vast literature on occupancy detection and estimation from different types of data and methods. The reader is referred to the review of Chen et al (Chen, Jiang, and Xie (2018)) for a more comprehensive insight.

A HMM is defined by:

The transition probabilities \(\left(a_{ij}(t)\right)\) are shown here as functions of time because they can be formulated as parametric expressions of external observed variables, such as the time of the day or weather variables. The Markov chain is then called inhomogeneous. Inhomogeneous transition probability matrices can capture occupancy properties at different time instances and thus encode occupancy dynamics: there can a higher probability of people entering the building at a certain time of the day, or if the outdoor temperature is high, etc.

Training an HMM means finding the set of parameters \(\theta\) which best explain the observations. This can be done by in least two ways: the first option is to compute the likelihood function with the forward algorithm, explained below, and to perform its direct numerical maximization. The second option is the Baum-Welch algorithm, a special case of the expectation-maximization (EM) algorithm: it alternates between a forward-backward algorithm for the expectation step, and an updating phase for the maximization step.

A trained HMM can then be used to predict states and future values of the outcome variable. The estimation of the most likely state sequence given the observations is called decoding. \[\begin{equation} z^*_{0:T} = \mathrm{arg max}_z \; p(z_{0:T} | y_{0:T}) \tag{8.2} \end{equation}\] and can be done by the Viterbi algorithm described below. 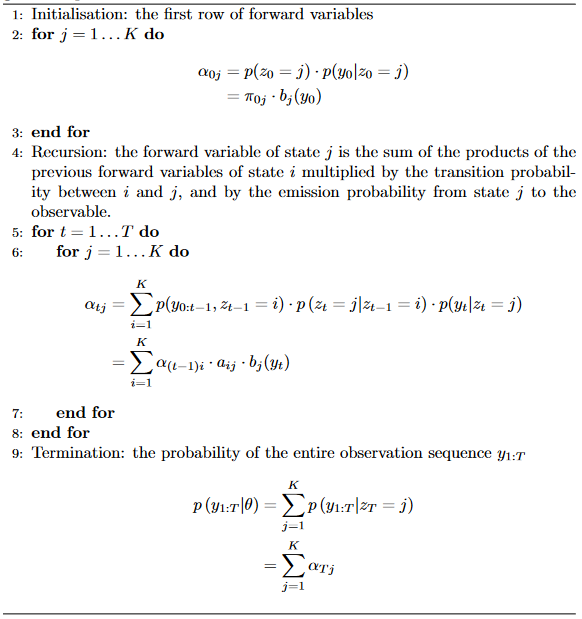 Figure 8.2: Forward algorithm for computing the likelihood of the data \(y_{1:T}\) given the parameters of a HMM

The Viterbi algorithm looks similar to the backward algorithm, with an additional backtracking phase. It produces two \([T \times K]\) matrices \(\delta\) and \(\psi\) and fills them row by row in a forward phase. Then, a backtracking phase computes \(z^*_{0:T}\) from the \(\psi\) matrix. The algorithm is described with more detail here. 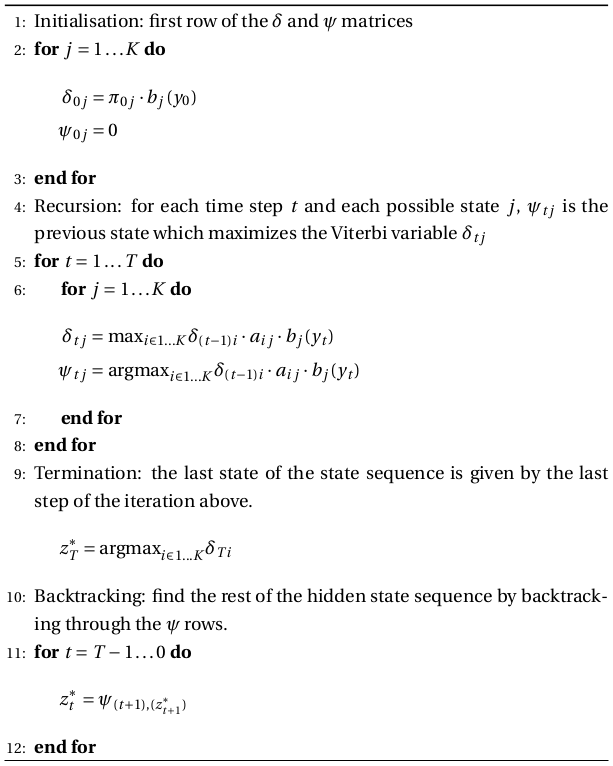 I am currently working on the use of time series models for a Bayesian forecasting of building energy use. There will be a tutorial here after I get some results. In the meantime, hidden Markov models are also covered in the Stan user’s guide.

Candanedo, Luis M, Véronique Feldheim, and Dominique Deramaix. 2017. “A Methodology Based on Hidden Markov Models for Occupancy Detection and a Case Study in a Low Energy Residential Building.” Energy and Buildings 148: 327–41.